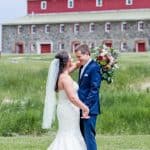 Kylee + Ryan’s rustic ranch wedding at the Kleffner Ranch in Helena, Montana, will inspire you with its Montana charm, beautiful bold colors, and so many personal touches.

Although they didn’t have any classes together, Kylee and Ryan had the same circle of friends in high school and began to notice each other sophomore year.

“I saw that he was taking the same math as I was, during a different period, but I thought I would use this to help me begin a conversation with Ryan. I texted him one night and asked if he could help me with math because I was struggling. Little did he know that I had an A in the class and come to find out he was not doing so hot. We began helping each other in math and started talking a lot more.” – Kylee recounted.

After a date night at the ballet and pizza with friends, Kylee hoped Ryan would ask her to be his girlfriend. He dropped her off, gave her a kiss, and left without asking. Her heart was broken, but she knew this was the beginning of something special and just had to be patient.

After meeting Ryan’s family for the first time – a great evening playing card games together – he finally popped the question. The will you be my girlfriend question. “Obviously, I said yes, and was a very excited 16-year-old girl!” Kylee said.

Fast forward to April 2018. Ryan had just completed his internship to become a Clinical Lab Scientist in Great Falls, while Kylee had just graduated with her teaching degree in Helena in December.

After a year of traveling back and forth between Great Falls and Helena, they continued to join their lives together by moving into a new apartment in Helena. It was also at this time Kylee accepted her first teaching position with the Helena School District. A new job. A new home. And a soon to be engagement.

On move-in day, they spent the entire day unpacking and went to On Broadway for a celebration dinner. Ryan hadn’t eaten a lot, because he was about to ask Kylee a huge question!

They headed to Ryan’s parents for dessert. “Congrats Ky on the teaching job!” Ryan said as he opened the door to a living room filled with both his and her families. Kylee turned around to find Ryan down on one knee with a ring box in his hand. “Kylee, will you marry me?”

“Of course, I said yes because I knew I wanted to spend the rest of my life with him. I cried, he cried, and our families cried and was hands down the best day of our lives.” Kylee gushed.

The rest of the evening, they spent drinking champagne, reminiscing on their relationship, and what their future has to hold. 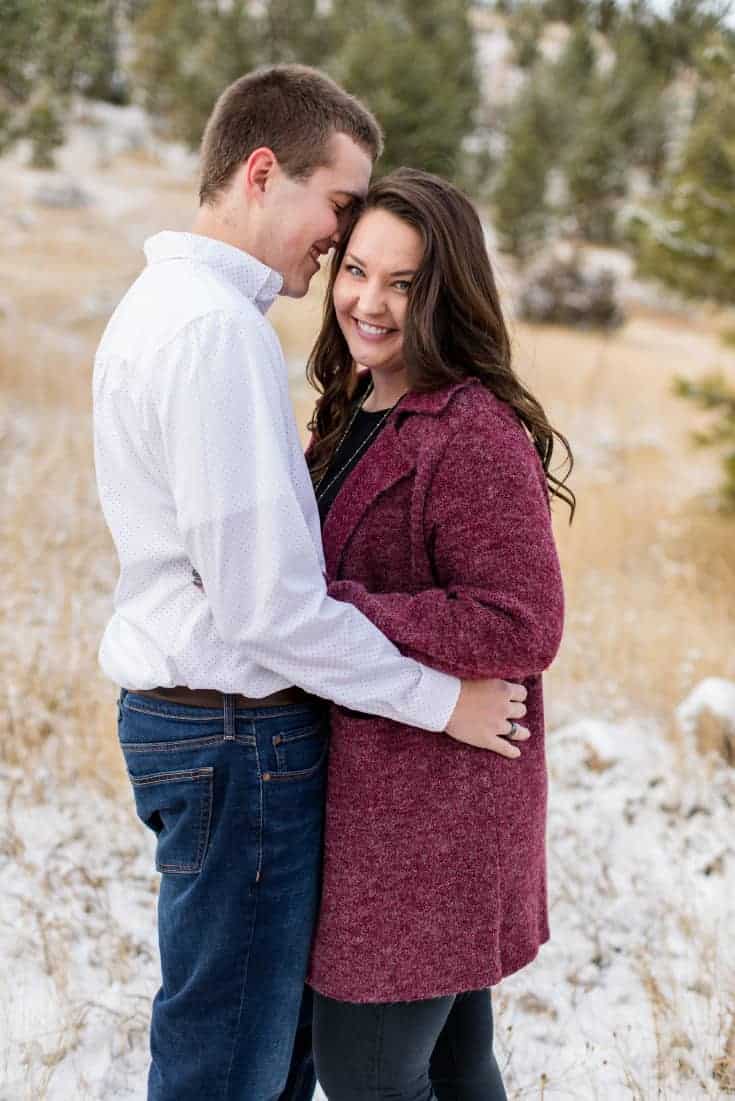 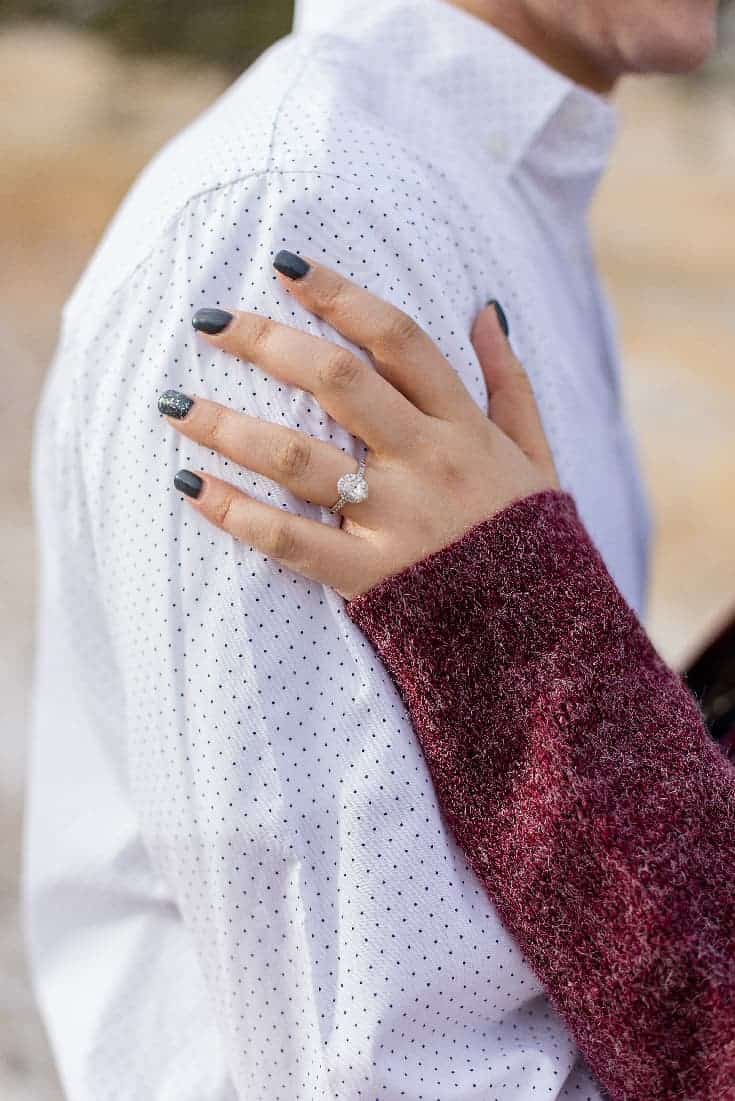 From the moment she said yes, the Hauck’s knew their wedding would take place in sprawling Big Sky Country. In the state they grew up in and love. Helena, their hometown and current residence, is where Ryan and Kylee said “I Do”.

Rich burgundy, champagne pink, and deep navy blue were their signature wedding colors – guests got a sneak peek with their classic wedding invitations. 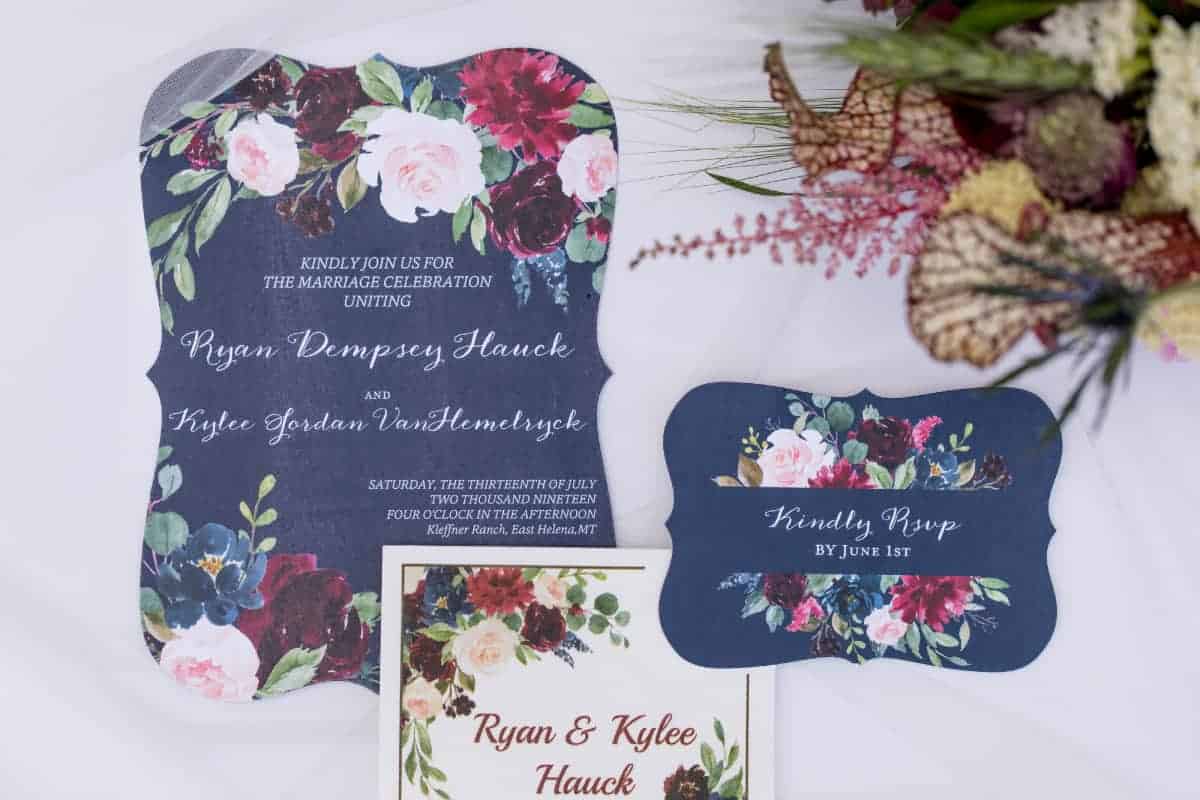 The wedding tone was rustic romantic – with inspiration including the great outdoors with grasslands, a vintage barn, a dance floor aglow under twinkling lights, and an endless amount of rich and vibrant florals.

From the barn doors in the open big sky air with a gorgeous floral trellis to the rich burgundy and deep navy colors to the historic red and brick barn, Kylee and Ryan’s wedding was undoubtedly a dreamy, rustic affair.

We love how Kylee planned a first look with Ryan AND with her father. These are unique, intimate moments they will never forget. 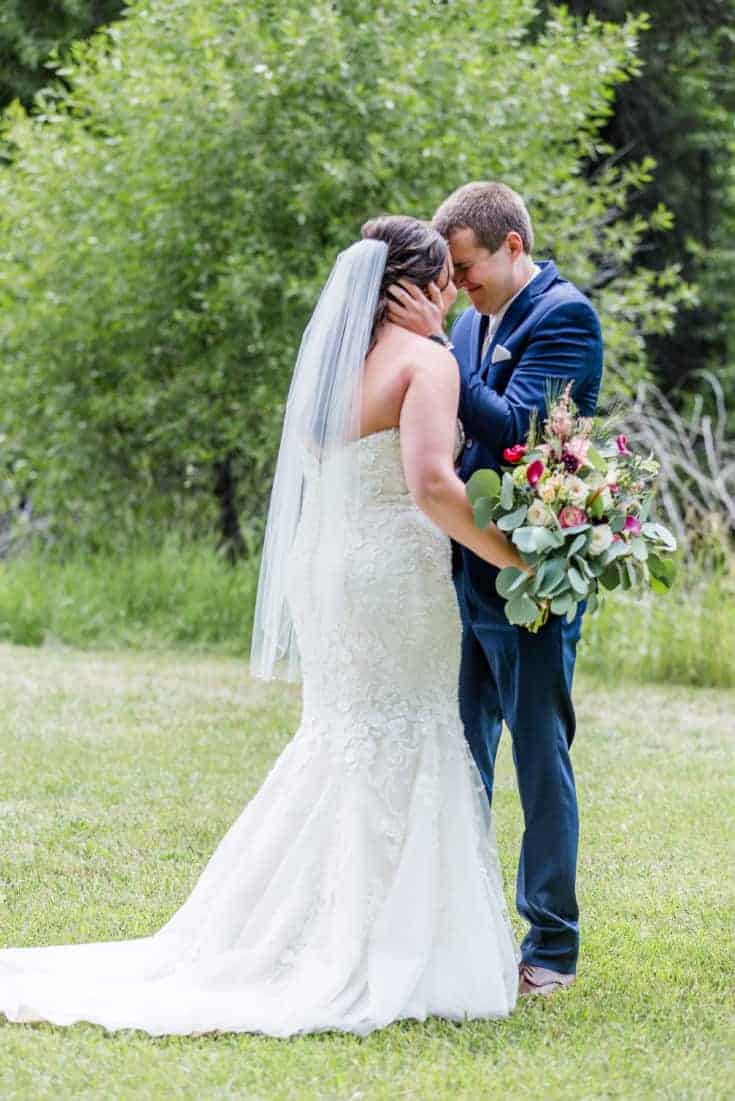 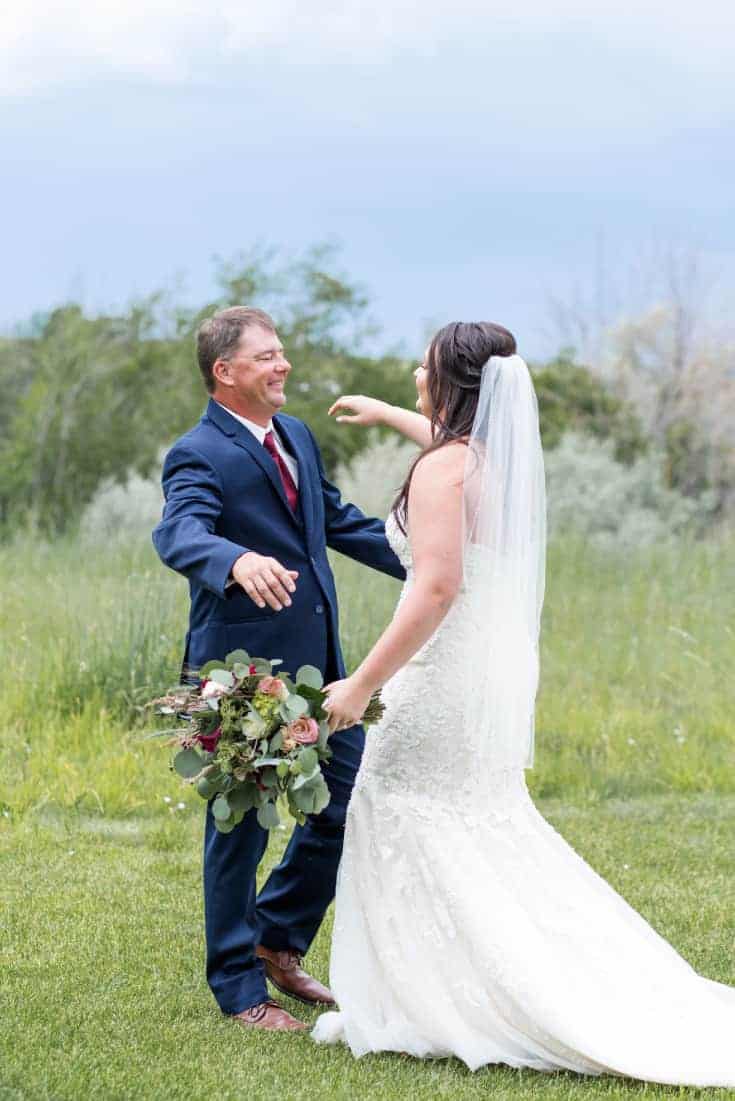 Kylee & Ryan’s dream wedding took place at the historic Kleffner Ranch. With over 10,000 square feet of rustic beauty in the Kleffner barn, Kylee walked down the aisle in the heart of Montana.

From the twinkle of the barn lights to the whiskey barrels to the old model A truck, everything about Kleffner Ranch is designed for a romantic wedding in Big Sky Country. 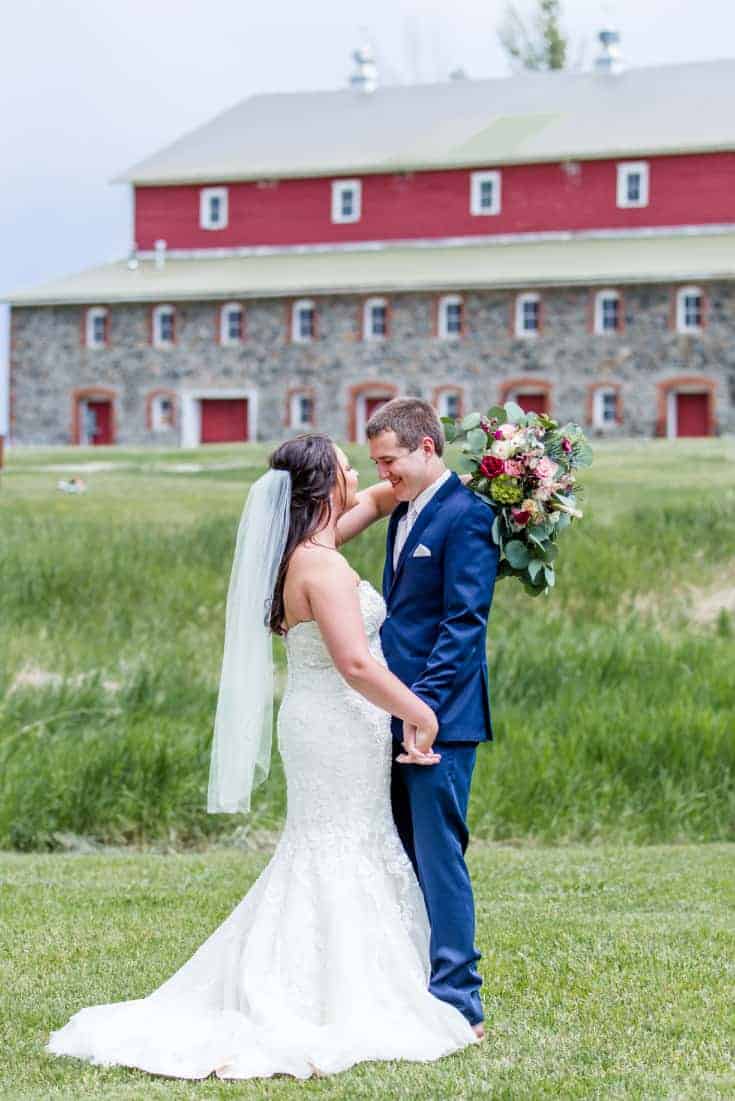 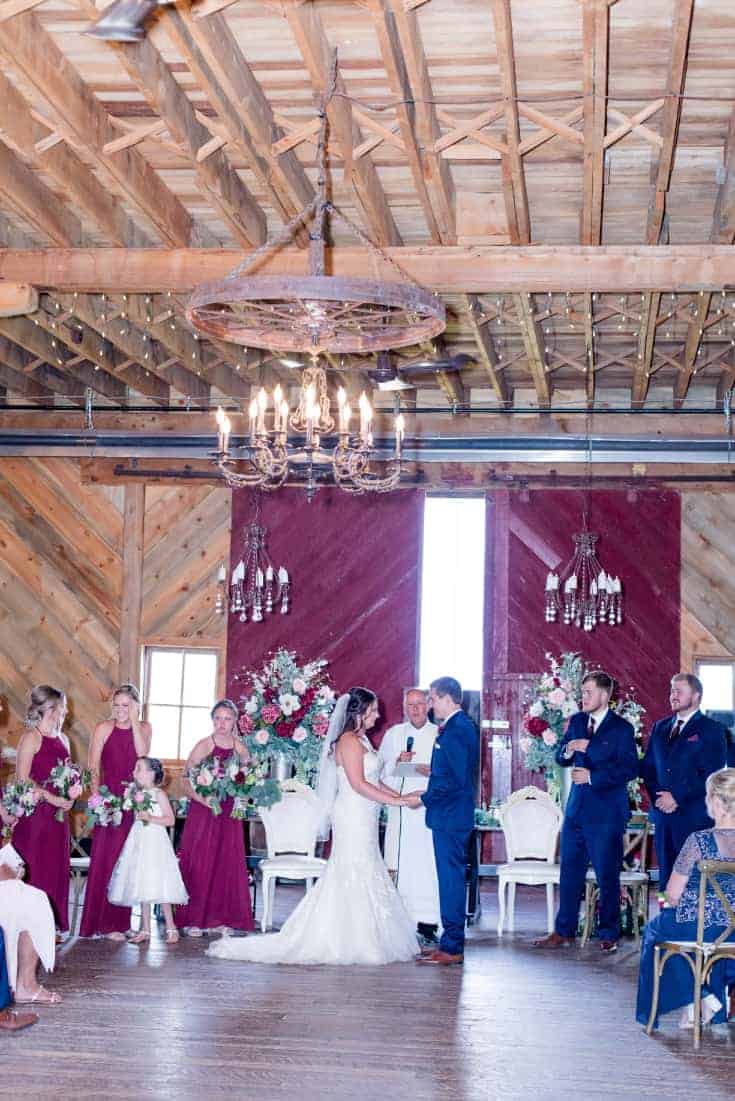 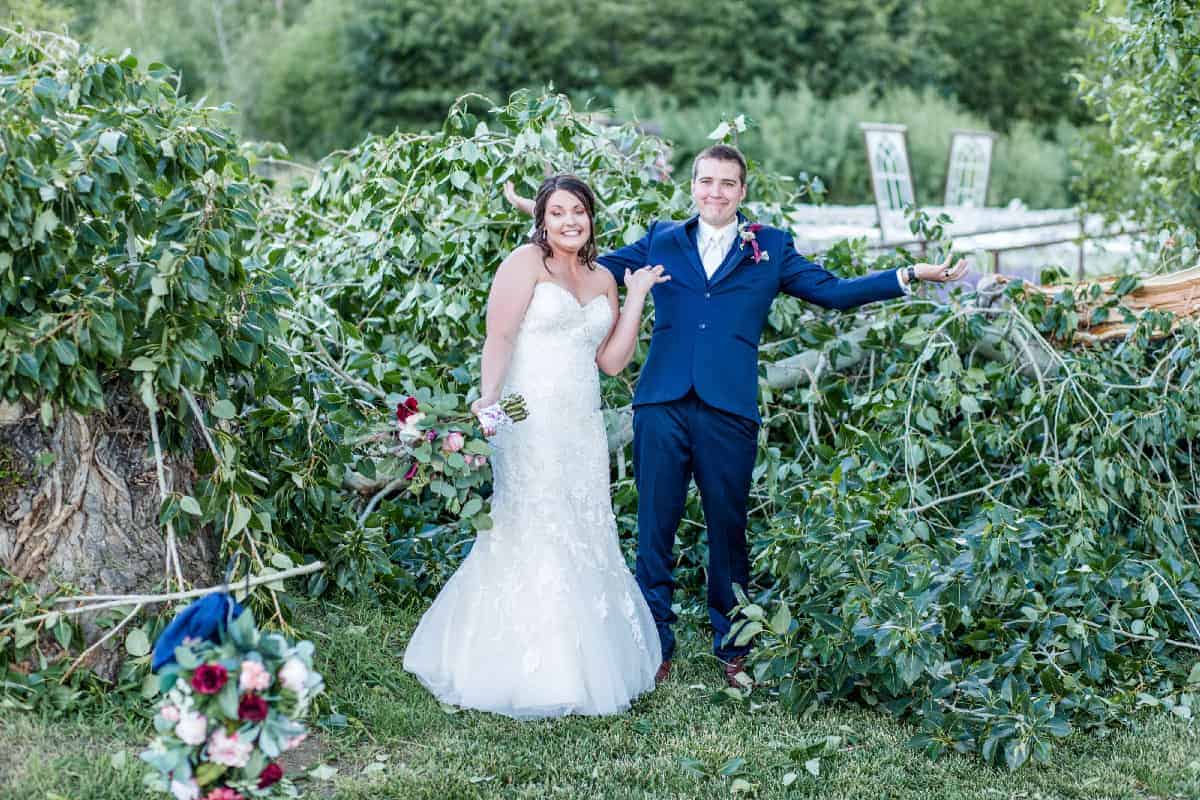 The ceremony was initially set to take place outdoors in the Kleffner Grove. However, Montana weather, as unpredictable as it is, had other plans.

If you were one of the 470 people that attended this wedding, we will always share a special bond–we survived a tornado together! WOW. The ceremony was interrupted by a small little weather snafu that snapped multiple trees in the Helena Valley…including one right next to the ceremony site! –Kelly Van Dyke, their photographer recounted.

The weather will be an unforgettable part of Kylee and Ryan’s big day. The Kleffner Ranch proved to be the perfect venue choice, as the Kleffner Barn was able to accommodate an indoor ceremony at the last minute. This goes to show, not everything may go as planned on your wedding day, but you can still have the PERFECT day.

Kylee walked down the aisle in a stunning ivory, mermaid style gown with a delicate lace overlay designed by Morilee by Madeline Gardner at Bridal Collections. Her shoes – champagne, strappy heels adorned with crystals, were truly fit for a princess! 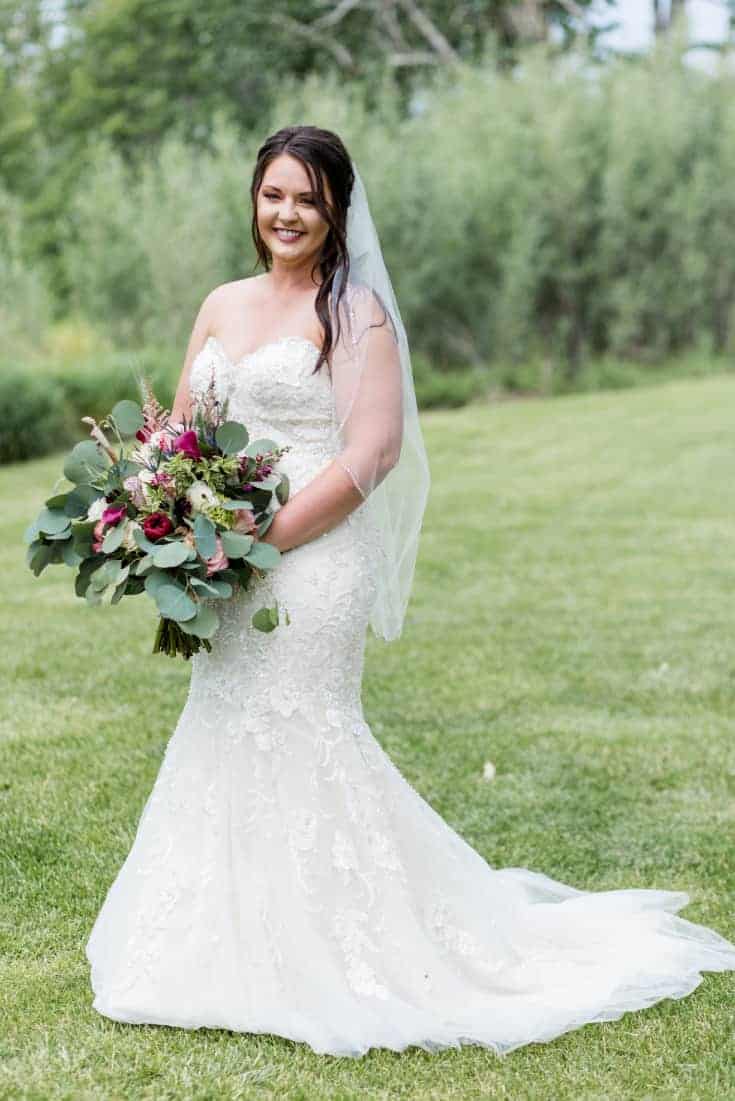 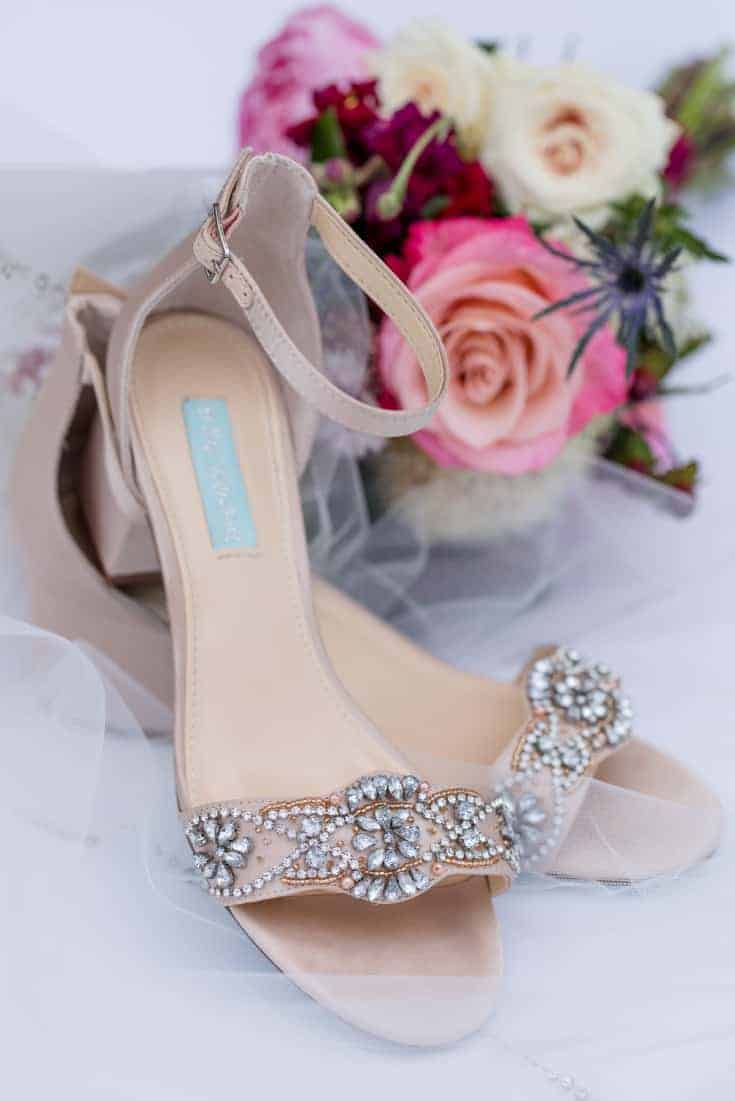 Everything about this wedding was so well coordinated. The bridesmaid dresses and groomsmen tuxes were no exception. We are in love with this burgundy + navy combo and how this color palette made the florals pop. 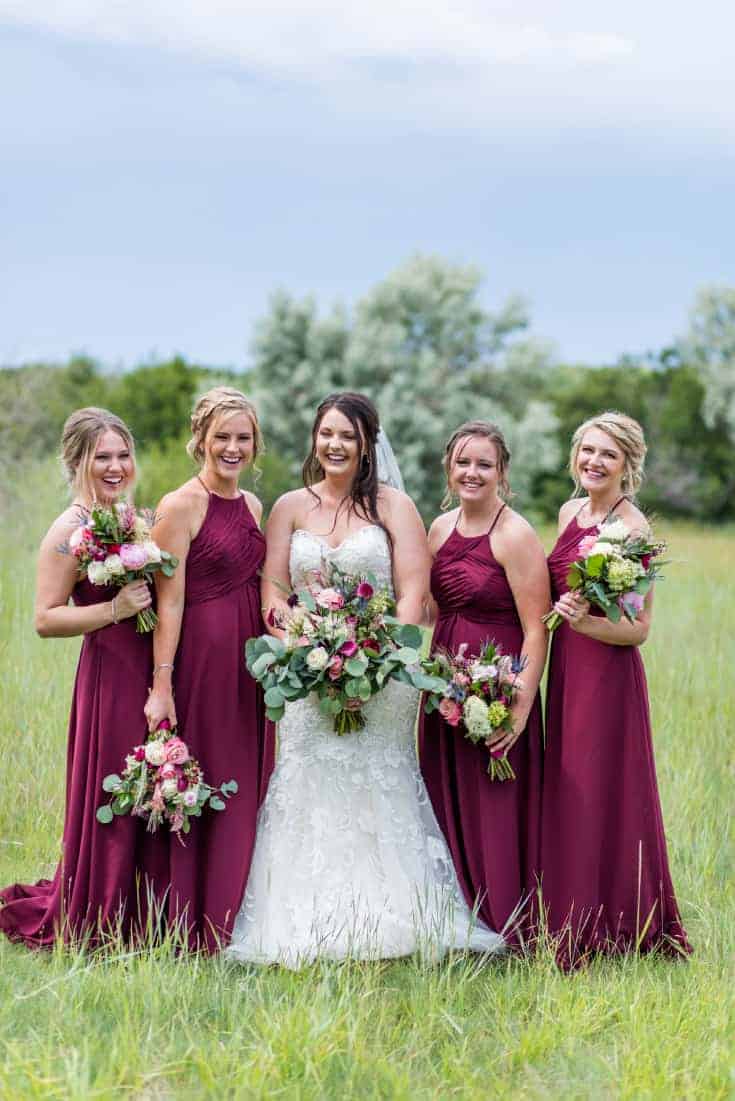 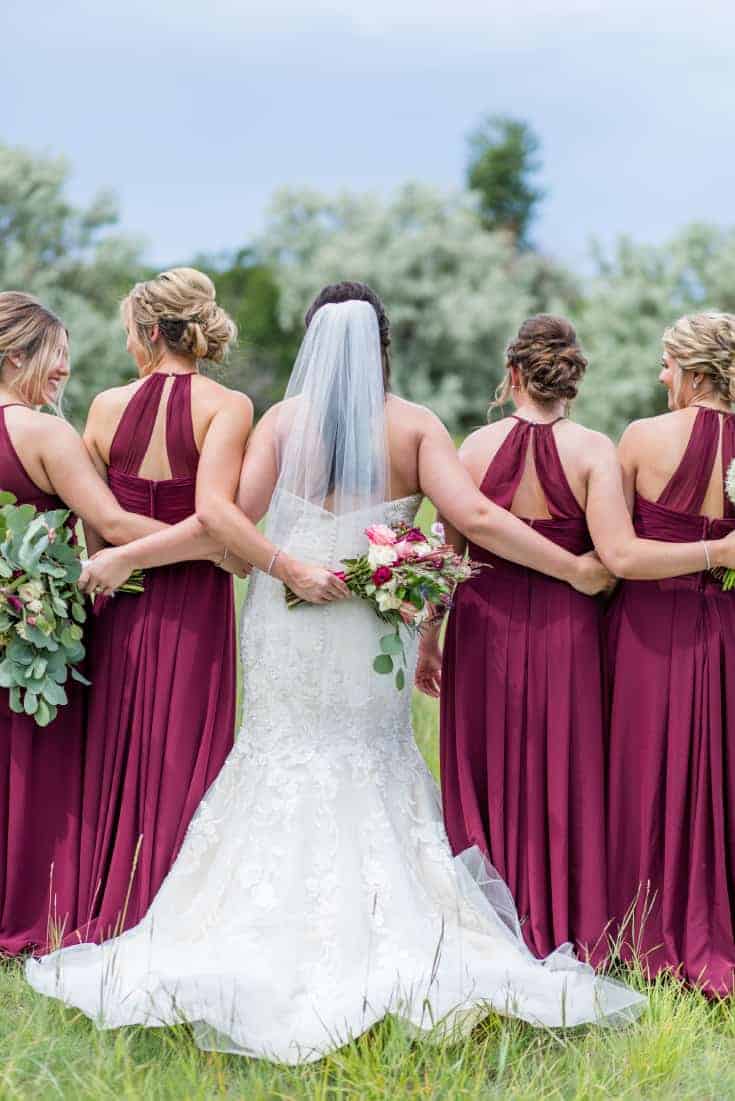 Navy suits with burgundy ties and lapels. How cute is the ring bearer in the suspenders? 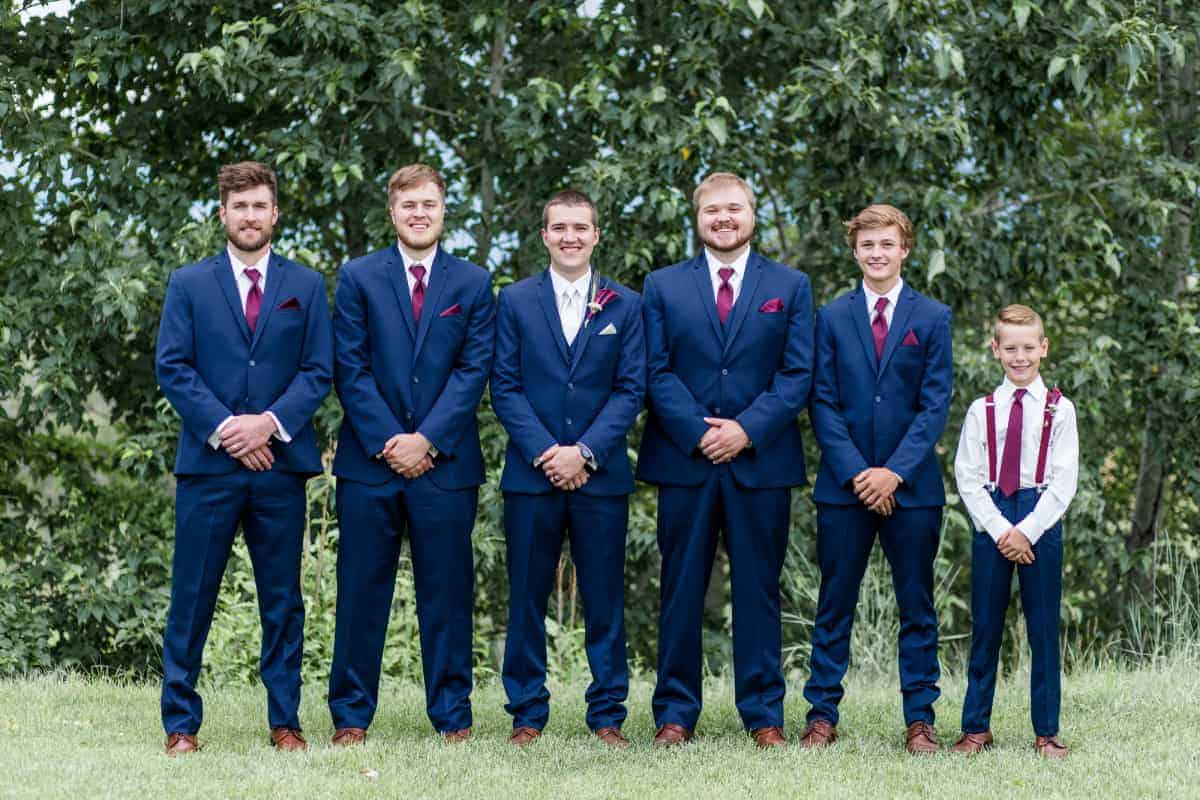 Florals were displayed throughout the venue and the wedding party. From the delicate boutonniere Ryan wore on his lapel, to the beautifully adorned lanterns to the elegant trellis cascading down the open barn doors – these lavish flowers set a beautiful tone for this dreamy, rustic wedding. 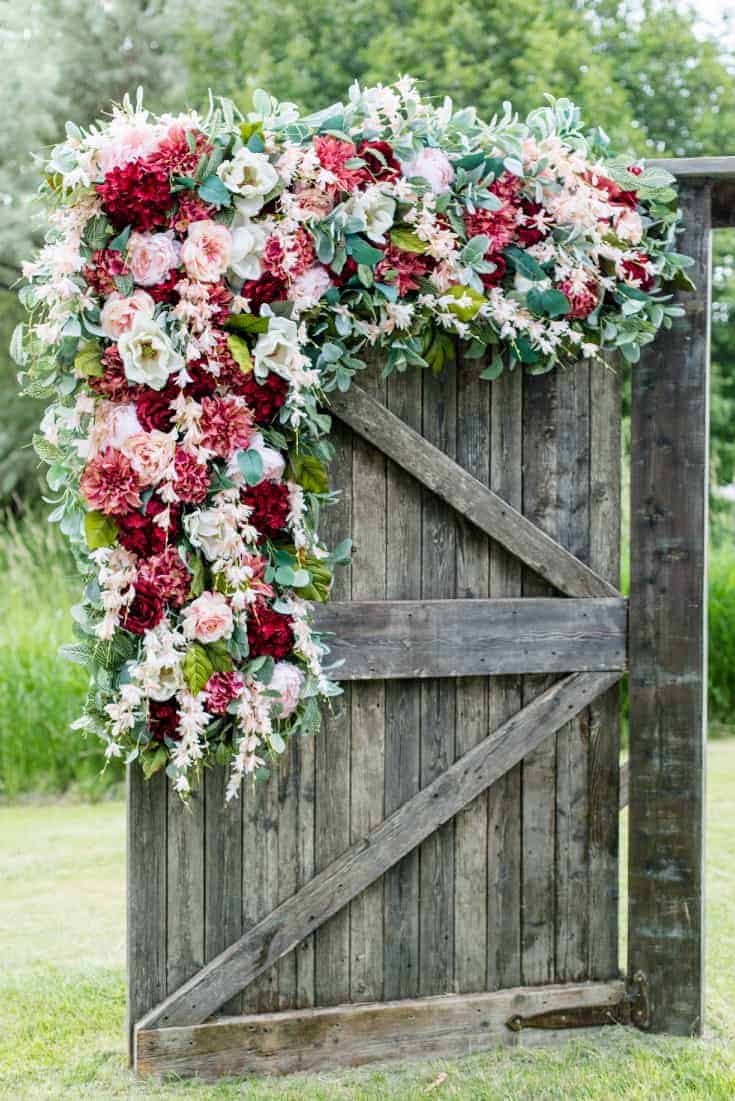 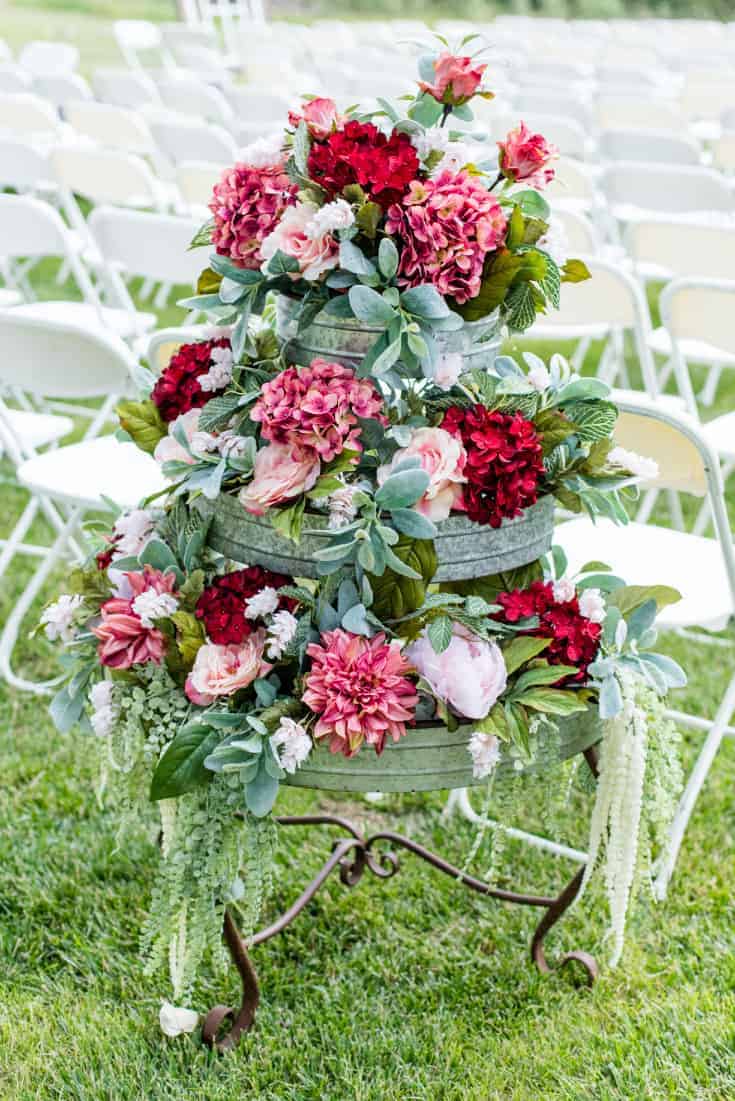 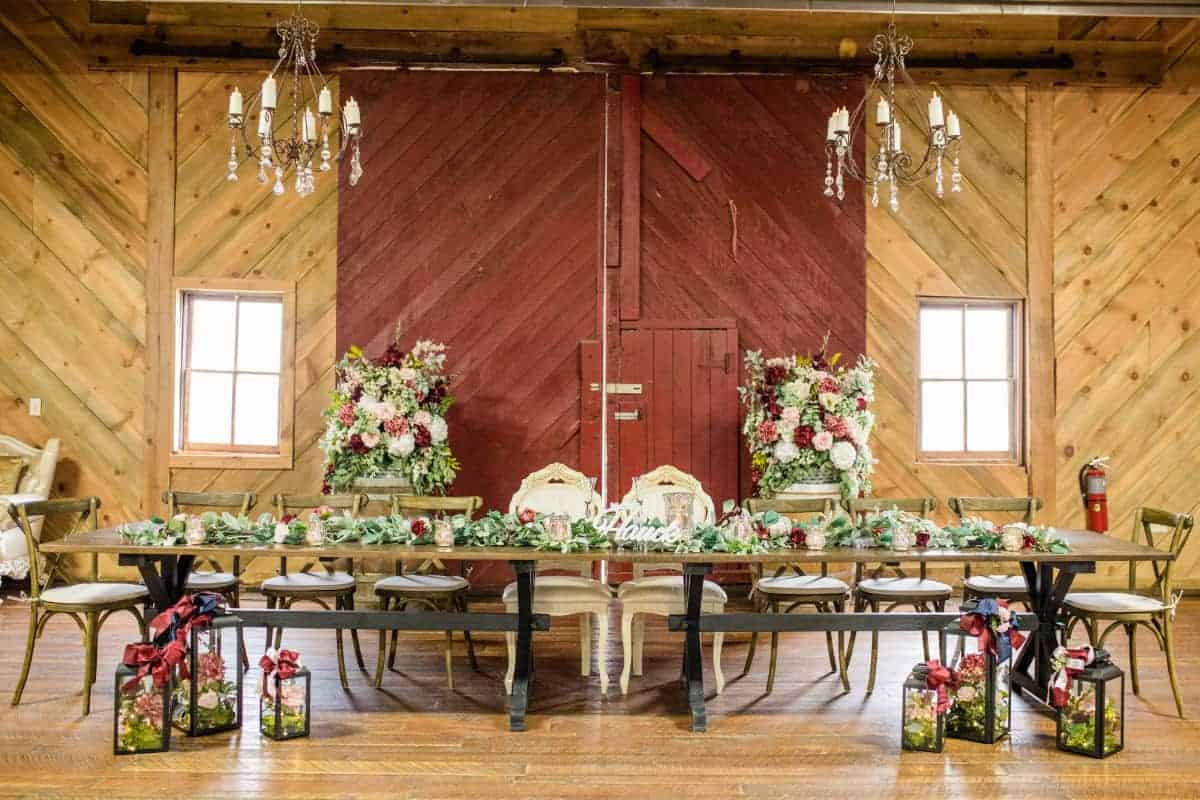 Each guest was given an itinerary for the evening. We love this idea. Keep your guests in the loop throughout the evening and provide them with a sense of how long the celebration will last. 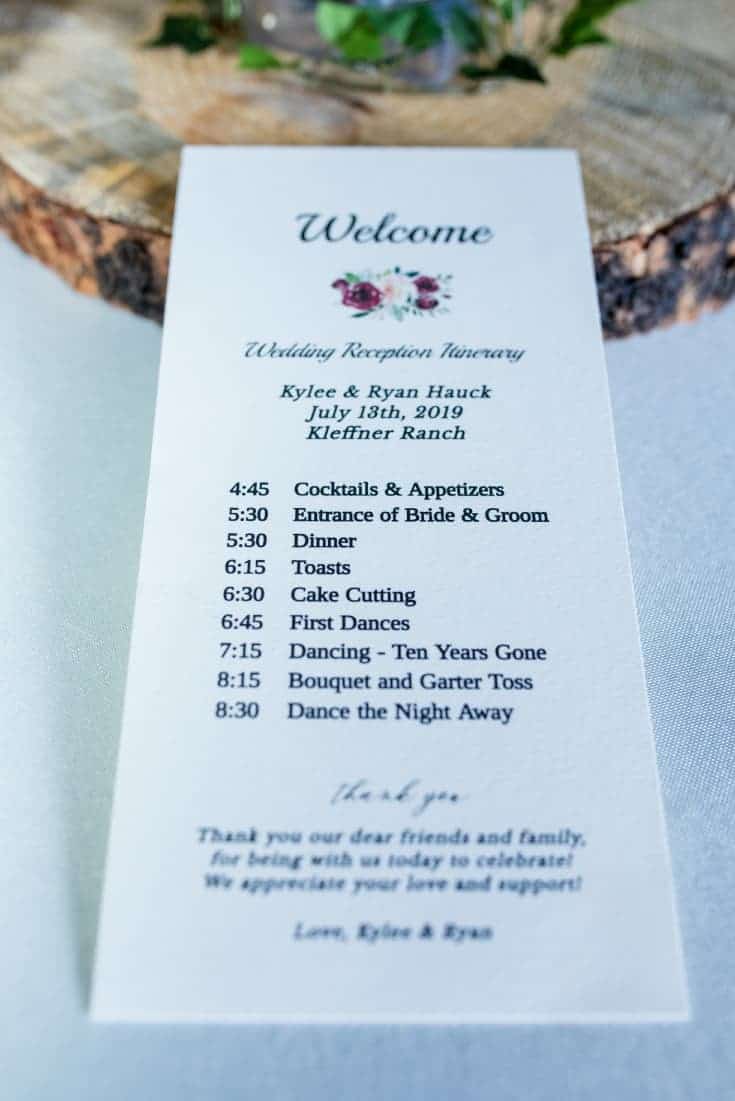 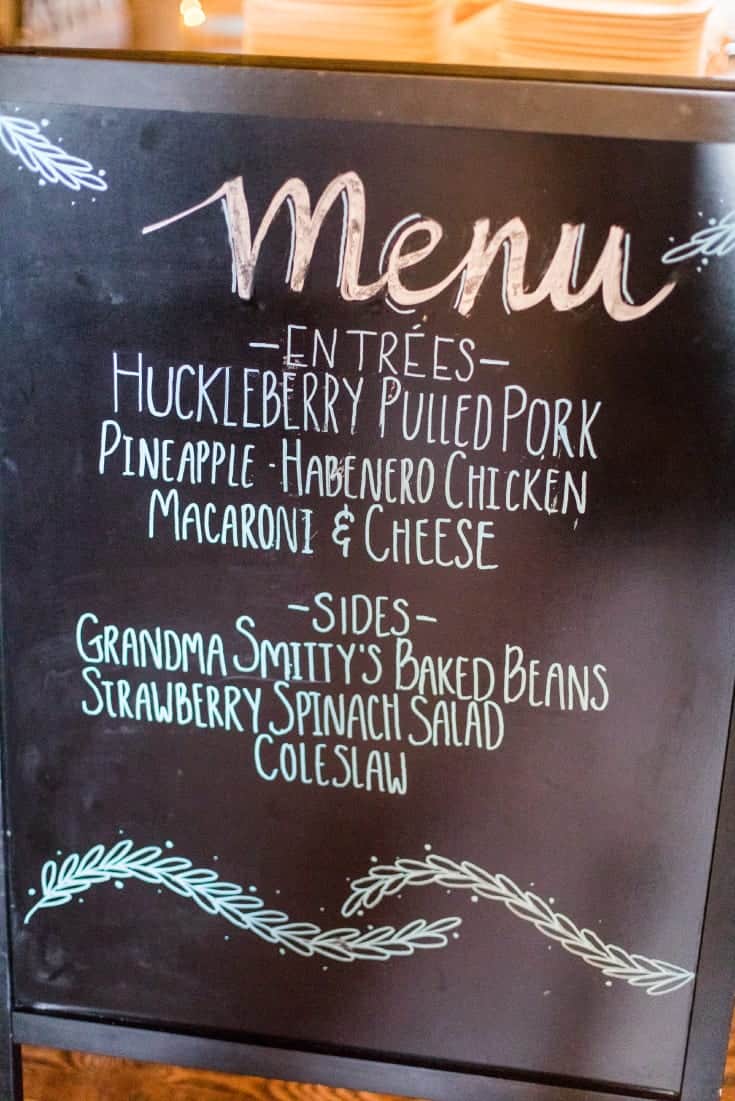 The dessert table featured a decadent three-tiered beauty with a cascade of gorgeous flowers by Park Avenue Bakery. Guests also enjoyed an array of cupcakes – including pumpkin with cream cheese frosting. May we say yum! 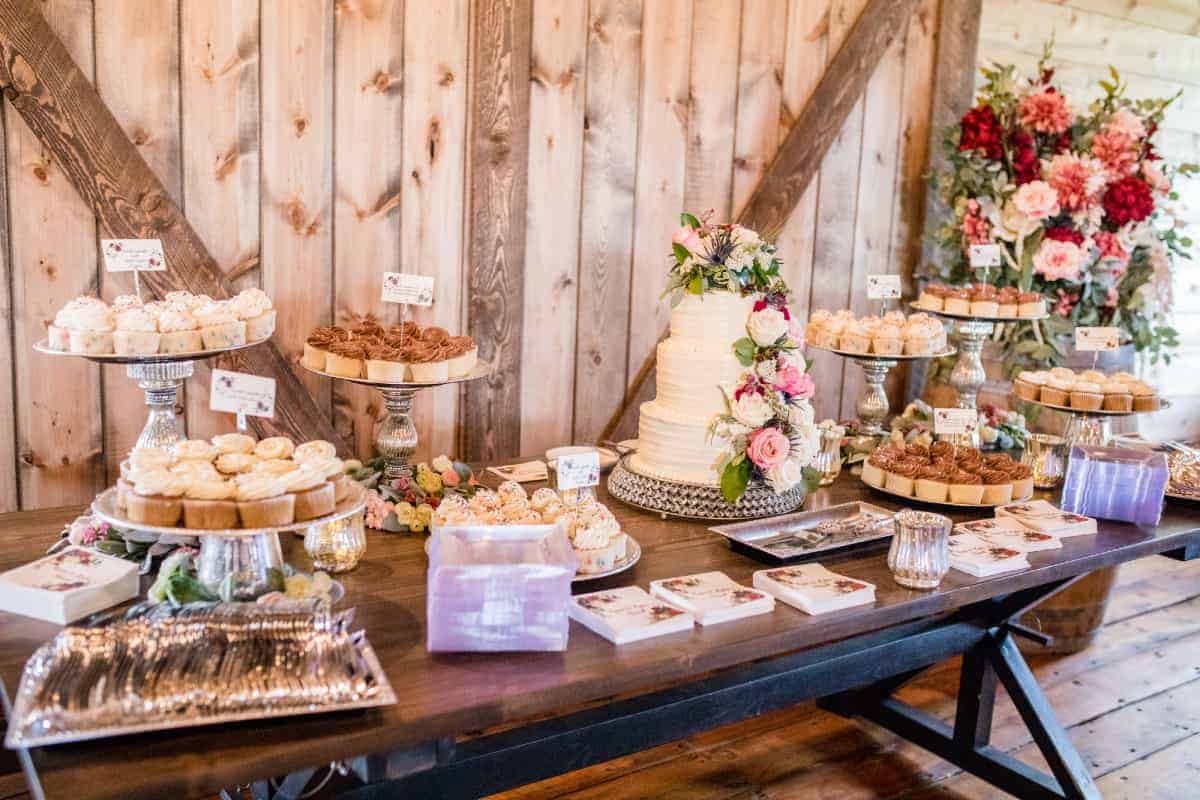 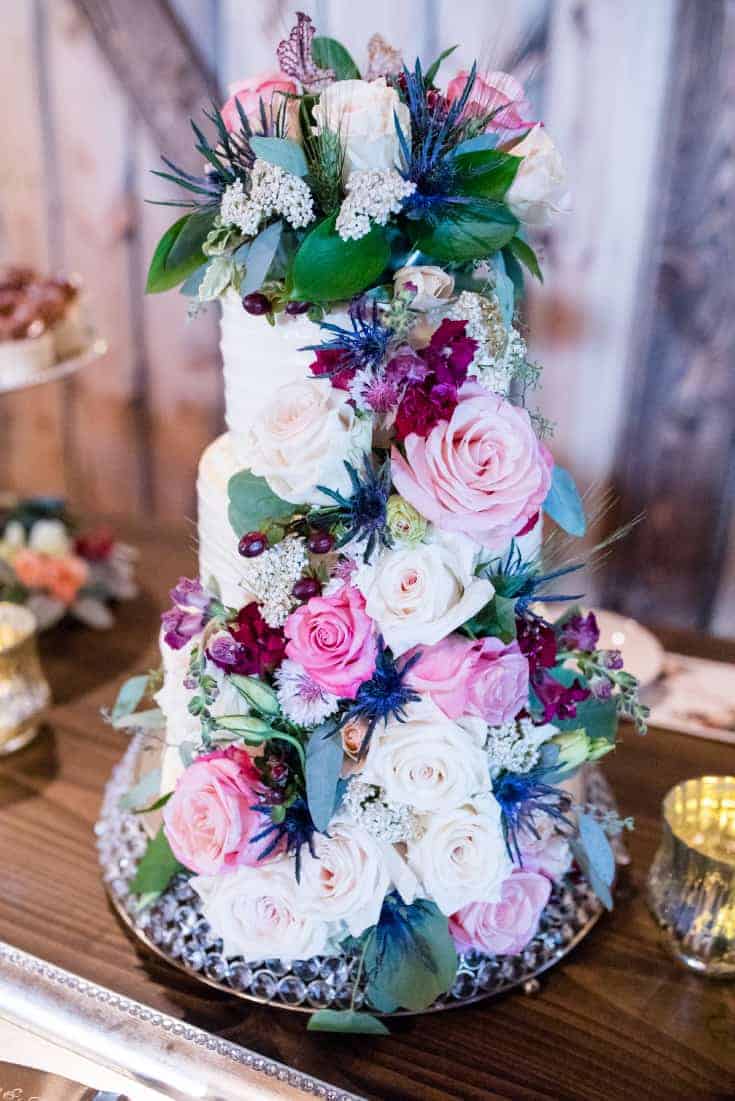 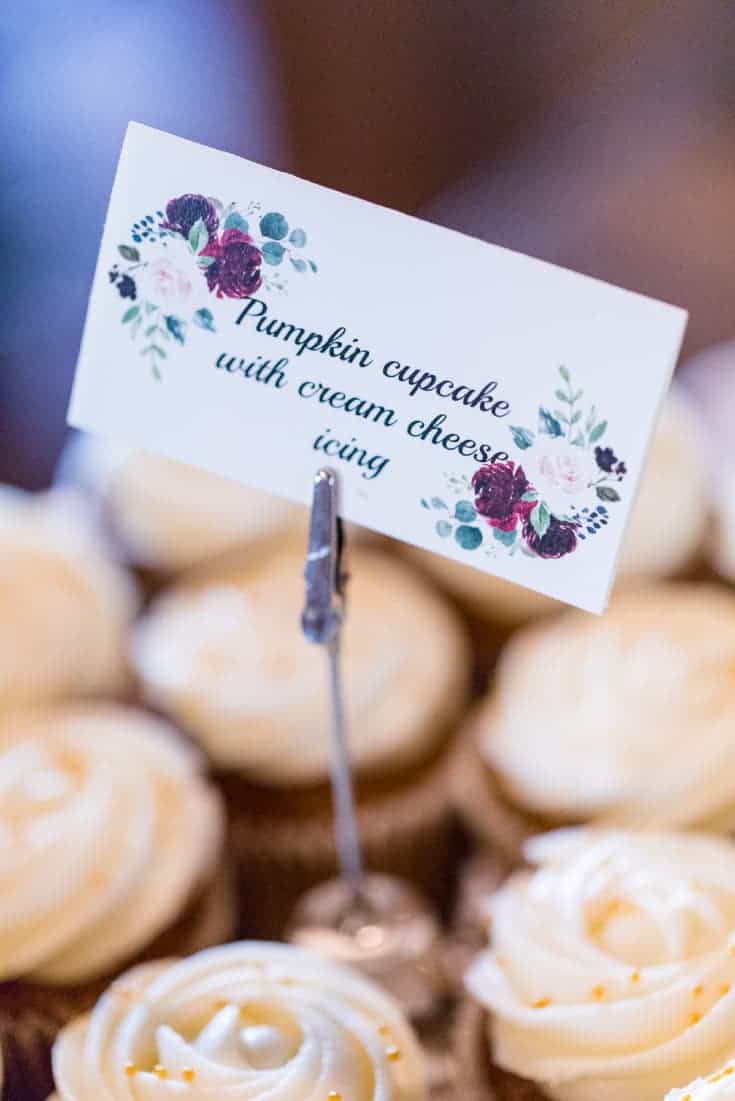 A photo book of the Hauck’s engagement photos served as their guest book for their guests to leave well wishes. 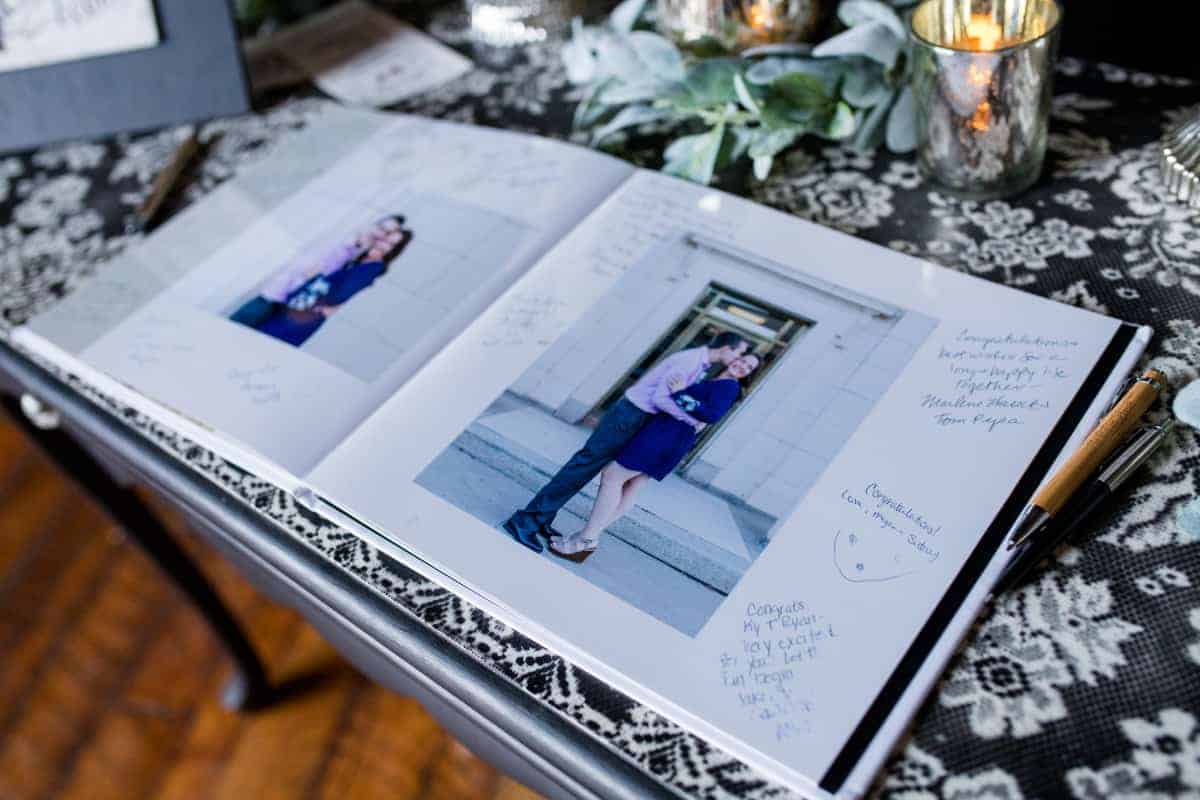 We can’t get over these gorgeous detail shots. Kylee’s bridal rings glistening against a delicate pink rose. And both bride and groom rings representing their union. 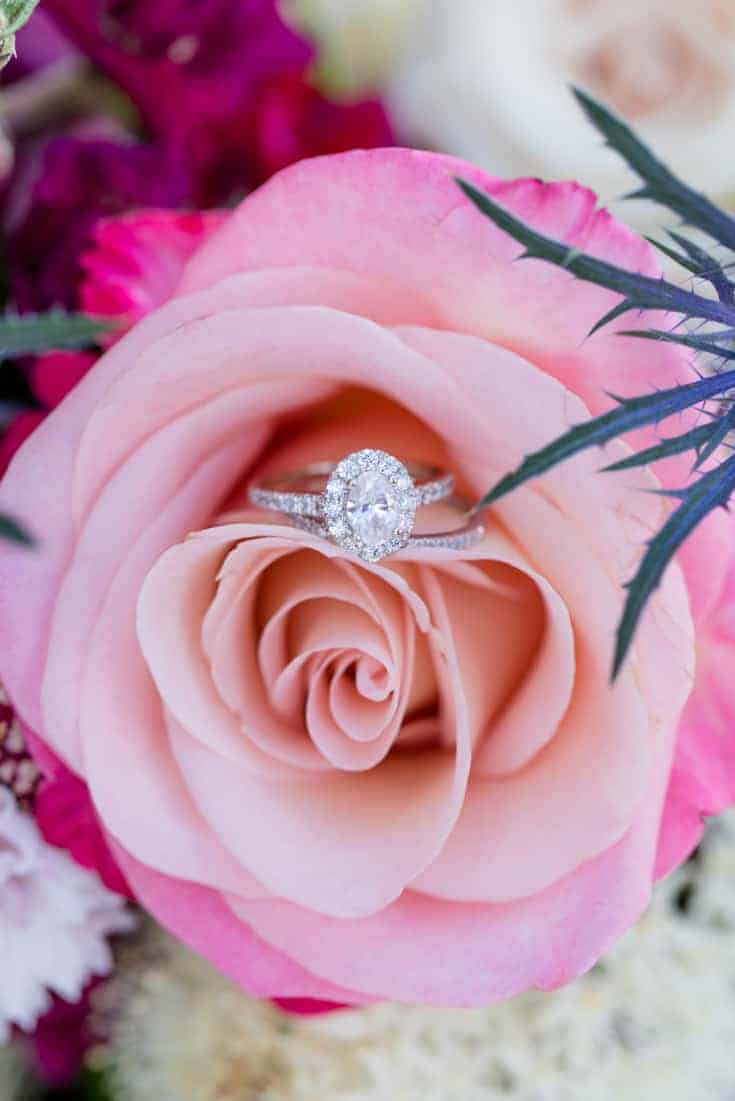 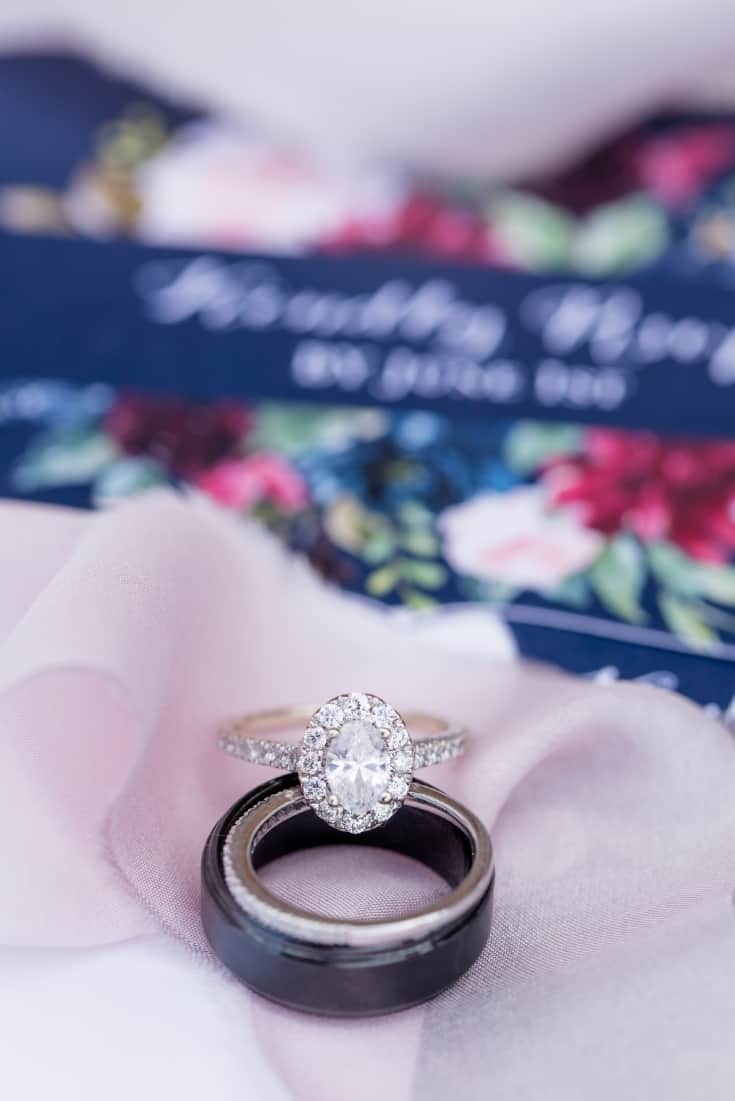 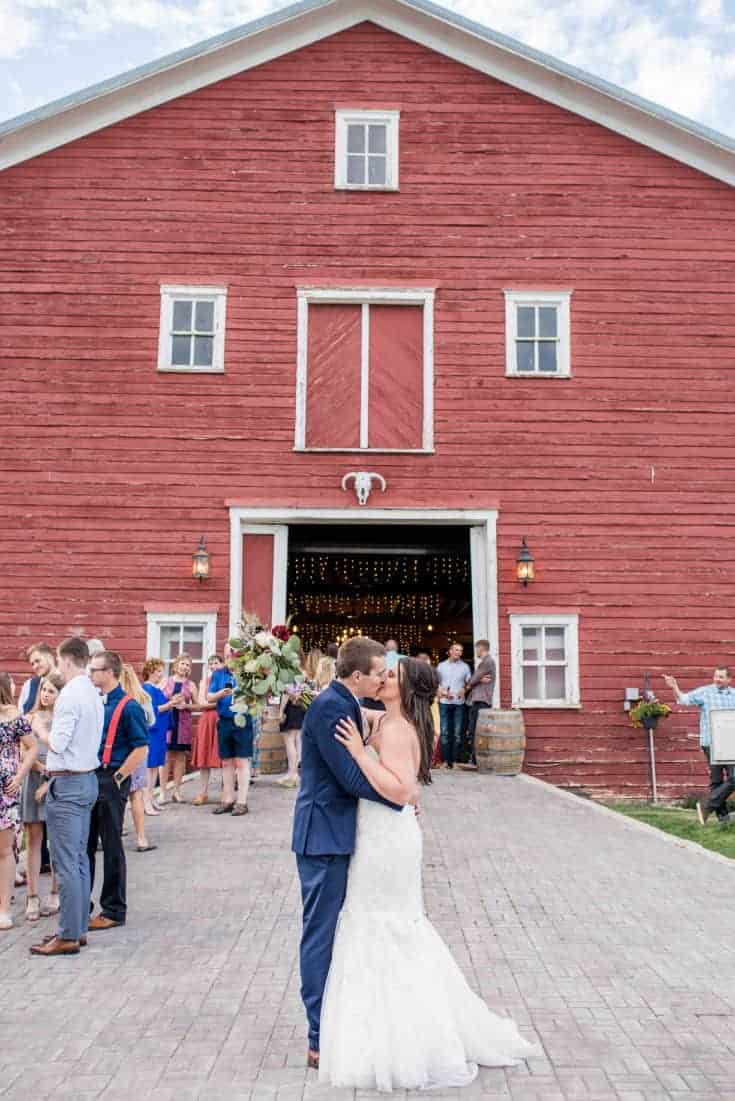 For the opportunity to have your real Montana wedding featured on Cheers MT, please email [email protected] or submit an inquiry here.